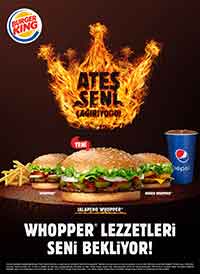 Burger King starts a new advertising campaign which underlines the power of the Whopper’s fire in an amusing way.

In each of the two commercial films, the fire calls the young people as they deal with a very important task. And the young head for the Burger King leaving the other party in the lurch.
But, those that are left in the lurch appreciate the situation as they even wholeheartedly support the young people’s leaving.

In the film shot in a swamp, a young man all of a sudden hears the call of the fire echoing in the forest while he tries to save his friend who got stuck in the swamp. And the man who is at stake to be left alone against his destiny gives to the friend his car key to help his friend reach the fire quickly. While in the Pilot film, the pilots ask for emergency landing from the tower; and the tower people waives from helping the pilots once they hear the call of the fire. And the pilots who appreciate this continue touring in the air.