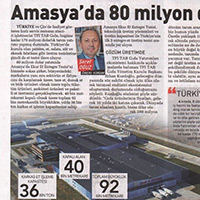 TFI TAB Gıda, quick service restaurant chain operator in Turkey and China, has invested USD 170 million in agriculture so far.  Now, another meat processing plant is added to the existing agricultural plant portfolio of the company in potatoes, meat, salad, dairy and bread.   With its Ekur Et Integrated Processing Plant which the company has recently inaugurated with an investment of USD 80 million in Amasya, TFI TAB Gıda will produce collective consumption products, delicatessen products and packaged meat production including mainly fresh meat, frozen meat and lunch counter products for satisfying the needs of the entire industry as well as its own brands.  Amasya Ekur Et Integrated Processing plant on a total area of 92,000 square meters 40,000 square meters of which are covered with a capacity to process 36,000 tons of carcass meat. With these values, it has become the top third integrated production plant in Turkey.

Production is the Key

In remarks aimed at explaining the TFI TAB’s food investments, TFI TAB Gıda Chairman Erhan Kurdoğlu said that they have to establish agro-industry ecosystem in Turkey in order to have a say in the world in future. Kurdoğlu continued as follows:  “The food prices will increase by two-folds in the next decade. Cultivated areas are restricted in the world; we have 280 decares of cultivated land in Turkey.  However, we can utilize only 35 percent of this area. This means that about USD 180 billion lies buried under the soil. We have got neither oil nor natural gas reserves in Turkey. Our biggest natural resource is agriculture. That’s why we need a transformation in agriculture.  We have to reshape our agricultural industry with a full focus on production rather than on trade. This is the only way that we can have a say in the world and overcome the food inflation and employment issues.”

We export potato from Turkey to China

Ata Holding operates in 8 countries across 6 continents with a business volume of USD 2 billion and it has a significant experience in agricultural industry. Kurdoğlu said, “TFI TAB Gıda draws its operational strength from the agricultural industries ecosystem in which we invested USD 170 million. Outsiders may see us as a quick service restaurant operator, however behind this lies a huge ecosystem within which we provide solutions for bread, potato, salad, dairy and meat production. Among them, Ekmek Unlu Mamulleri, procures many kinds of bread products ranging from pizza dough to hamburger buns. This is one of the largest factories in Turkey with a monthly 25 million rolls and 1 million slice breads. Atakey, in which we are partners with Özgörkey Group, is a leading ready-to-fry potato producer of the world with 90,000 tons of production per year. We run contract farming activities with local farmers. This is not only for our restaurants in Turkey but also for exporting to China. Potatoes are processed for shipment to Chinese ports, and safely stored in cold stores with a total capacity of more than 20.000 tons.”

WE WILL INCREASE OUR CAPACITY FIVE-FOLD TO 300 TONS

Ekur-Et Integrated Processing Plant CEO Erhan Cansu said that they will increase their production capacities for some products. Cansu said, “We are planning capacity increases. For example döner is a special product of us. Both because it is a mass consumption product in our country and we have brand such as Usta Dönerci under the umbrella of TAB Gıda. For this reason, we started an investment that will increase out monthly production capacity from about 60 tons to 300 tons. We will complete this investment in a short while.  We do not export meat, however Turkic Republics, Arab countries such as Qatar and Kuwait as well as African market are on our radar.