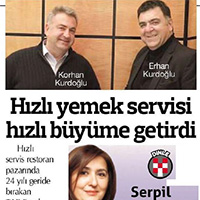 As of September 2017, and as China approached its 766th Burger King (BK China) restaurant opening, TFI’s total fast service restaurant holdings climbed to 1,822 restaurants, including th    e brands Popeyes, Arby's, Sbarro, and unique-to-Turkey "Usta Dönerci". Burger King operates 21 restaurants in Georgia, Macedonia and the TRNC. The group’s 5 brands and 50% of BK China are subject to public offering in Nasdaq. The company, which expects to move Popeyes to China by public offering, also plans to spread the döner brand to countries outside of Turkey. TFI intends to be listed in the Istanbul Stock Exchange.

At a table with TFI Holding Chairman Erhan Kurdoğlu, Vice Chairman Korhan Kurdoğlu, TFI CFO Ekrem Özer, CMO Emir Işık, Board Member Melih Araz and the retired ambassador Hakkı Akil who is a TFI advisor, we lead with the first question that comes to mind: Have overseas investors asked for Turkey? They answer, "Approximately 150 investors were interviewed for a total of 150 hours and they shared no negative feedback. It’s clear that investors have a clear appetite for Turkey’s growth potential.  They are attracted by Turkey’s emerging economy and young population." To give an example of how investors trust Turkey, they continue, "Our financial investors came to us two days after Turkey’s July 15th coup attempt. By the 8th of August, 2016, we had sold $150 million worth of shares.”

Erhan Kurdoğlu said that RBI, who had only been able to open 60 Burger King restaurants in 8 years in China, offered this market to TFI. "We entered China in September 2012.  Our meat is produced specifically for us in China. We send 20,000 tons of potatoes from AtaKey per year, which equals 20 million dollars of exports. Our construction expertise has reduced restaurant size from 350 to 250 square meters. We have made our purchasing and operating costs cheaper." TFI's 2017 sales reached 4 billion liras which is up 40 percent from 2016. With the franchises this figure is approaching 6 billion liras. 2017 closed with a profit of 360 million liras; an increase of 60 percent. The company, which employs 50,000 people at home and abroad, has opened 1,035 restaurants in Turkey’s 72 provinces.