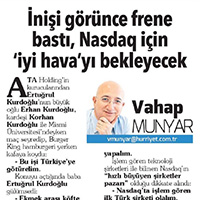 Erhan Kurdoğlu is the eldest son of ATA Holding’s founder Ertuğrul Kurdoğlu. He and his brother, Korhan Kurdoğlu, were at Miami University watching a match and eating a Burger King hamburger when an idea came to his mind:

“Let's bring this brand to Turkey.”

When Erhan Kurdoğlu suggested the idea to his father, his father laughed:

“Are you going to sell meat between bread? We have more important jobs to do. Support those jobs together with your brother.”

Erhan Kurdoğlu, however, was determined, and opened the first Burger King in Etiler in 1994. The management of Brazilian 3G Capital, which received 4 billion dollars from the parent company of Burger King in the US in 2010, came to Istanbul in 2011 and told TAB Foods’, Ata Holding’s Kurdoğlu brothers the following:

“10 years after McDonald's entered, you entered as the second player, and your restaurant count is already 2.5 times higher than your opponent’s. You are our best operator in the world. We entered China 8 years ago but we have only opened 60 restaurants. We want you to manage our operations in China.”

Erhan and Korhan Kurdoğlu, along with TAB Food's CEO Caner Dikici, went to China. In 2012, BK China was taken over by TAB Foods and Ümit Zuvin was put as its head. While TAB Foods’ Burger King, Sbarro, Popeyes, and Arby's were growing rapidly in Turkey, BK China was ready to jump. In time, Turkey’s Usta Dönerci was added to the chain.

On July 17th, 2016, as they neared 1800 restaurant openings together with China, and two days after Turkey’s coup attempt, the European Bank for Reconstruction and Development (EBRD), which was TAB Food’s minority shareholder, signed an agreement to sell to Goldman Sachs and Credit Suisse. TAB Food Investments announced its intention to offer to the public in the fall of 2017. The Kurdoğlu brothers, TFI head Melih Araz, CFO Ekrem Özer, CMO Emir Işık, with the advice of Morgan Stanley banking, came to a decision:

“Americans know the fast food industry the best. Let's do the public offering in the US”

It was taken into account that Nasdaq, known for its technology companies, is a "fast-growing companies’” market:

- “Let's be the first Turkish company to trade in Nasdaq.”

Road show crews were formed and the first trading day for Nasdaq was determined:

- “We will participate in the gong ceremony on the morning of February 7th, 2018 with a public offering of 222 million dollars.
It has been discussed with 150 foreign institutional investors in 1.5 months. The U.N. Permanent Representative of Turkey, Feridun Sinirlioğlu; our Washington Ambassador, Serdar Kılıç; and the New York Consul General, Ertan Yalçın, have been invited to the bell ceremony. TFI and Ata Holding Advisory Board Member Hakkı Akil, TFI manager Celalettin Oktay, and Kübra Erman Karaca have gone to New York as a team.”

The New York Stock Exchange and Nasdaq suffered the greatest one-day drop in history as TFI’s last investor talks were completed in London on February 5th, 2018. The crew arrived in New York on February 6th. That afternoon, the Kurdoğlu brothers, the TFI management team and the advisory banks decided to “gear down”:

- Even if the slump is a correction, let’s postpone the public offering.”

The Kurdoğlu brothers, the TFI team and the advising banks sent the following message:

- Every situation has an upside. Wouldn’t it have been worse if we had offered to the public on February 2nd and then had a historic decline on February 5th?”

The plan was then revealed:

- The IPO will be held in Nasdaq this year at a better time.

In 2018, TFI will become the first Turkish company to enter the Nasdaq.