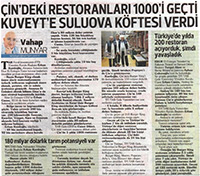 At the beginning of a press trip at Ekur Et Integrated Processing Plant in Suluova, Amasya, TFI TAB Food Investments Chairman Erhan Kurdoğlu underlined the strategy of the Group:

In order to ensure stable procurement for our chain restaurants including primarily Burger King, we engaged in the production of bread, potato, salad and milk. We founded Ekur, also known as Amasya Et Ürünleri, as part of the same strategy. Ekur Et CEO Erhan Cansu explained why they chose Suluova:

- The region is strong in agriculture and husbandry. There are about 200,000 cattle in the vicinity. Around the 200 km axis of Samsun, Kırşehir, Yozgat, Kars and Erzurum the livestock existence is around 1 million.

- We invested USD 80 million in Ekur which is established on a total area of 92,000 square meters, 40,000 square meters of which are covered. We have an annual capacity of 120,000 animals in cattle slaughtering and 36,000 tons of carcass meat processing.

Cansu said that Ekur is also engaged in stock farming.

We manage about 10,000 animals in our farm per year. Than he pointed out to the financial amount of their investment in industrial agriculture:

He said that Ekur will start to export from Suluova:

- Burger King chain in Kuwait will start to buy burger meatballs from us. This will amount to an export of 2 billion dollars per year. We will also talk with Burger King Chains in Saudi Arabia and Qatar for burger meatball exports.

At this point  he touched the potatoes produced in Atakey:

TAB Gıda CEO Caner Dikici points at the number of restaurants in China:

- The number of our restaurants in China exceeded 1,000 in 5 years. Now we are taking chicken restaurants Popeyes to China.

Kurdoğlu said they started the work with a 100 million dollar investment when they took over the Burger King in China:

- Our restaurant investment in China has reached 500 million dollars. For some time now, we have been making investments from our earnings there. We have restaurants in 148 cities of China.

He shared the latest data on TFI TAB Food’s investments:

- We have activities in eight countries in four continents. Our sales total 2 billion dollars a year.

He added that they opened 310 Burger King restaurants in China last year:

-We created a total additional employment of 7,000 in China and Turkey last year. In Turkey, we employ a total of 28,000 people when including our other restaurant chains and franchises. Another 24,000 people work in our restaurants in China.

Activities in China and Turkey have made TFI TAB Food Investments by far the leader in number of restaurants in the world of Burger King...
Restaurant chains consisting of Burger King, Sbarro, Popeyes, Arby’s and Usta Dönerci brands have also led to TFI TAB Food becoming an industrial agricultural producer…

Agriculture Has a Potential of $180 Billion

He emphasized that the agricultural industry should be considered by focusing on production instead of trade.

We Used to Open 200 Restaurants Yearly in Turkey, Now We Have Slowed Down

During a visit to Ekur Et Integrated Processing Plant by a group that included Turgut Aksu, President of Suluova Chamber of Commerce and Industry and Ayhan Çokusuğlu, owner of Beray Bilişim, Erhan Cansu, member of Board of Directors of TFI TAB Food Investments said that demand for ready-to-fry potatoes they produce at Atakey was strong.

He pointed to the investment climate:

This reply fueled my interest: