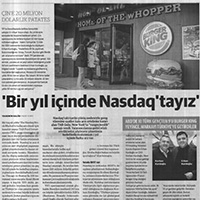 A TFI team of 4 people which was on roadshow with  in London, Chicago and Boston with 150 institutional investors for the last two weeks had great expectations from the initial public offering (IPO) due to both the spectacular growth pace of the company and the keen investment appetite for Turkey. The company is now watching for the most proper time for the IPO.

Last year, Goldman Sachs, Credit Suisse, and European Bank for Reconstruction and Development (EBRD) had bought 8.6 percent of the shares of TFI, which holds in its portfolio the brands Burger King, Popeyes, Arby’s, Usta Dönerci and Sbarro. The company decided to go public together with its financial partners after this purchase, and in line with the guidance of its shareholders, it chose Nasdaq Stock Market of the United States as the listing venue since Nasdaq is predominantly favored by high-growth companies.

Globally, TFI operates under Restaurant Brands International (RBI), one of the biggest subsidiaries of Brazil-based 3G Capital. CEO Korhan Kurdoğlu said, “We provide 20 percent of the annual growth of RBI, the apple of eye for 3G which manages USD 400 billion in aggregate per annum. This corresponds to 10 percent contribution in 3G’s overall growth. We will take them to the public offering as a Turkish company. We are the leading business partner that adds value to the Group”.

TFI Holding Chairman Erhan Kurdoğlu and CEO Korhan Kurdoğlu, who decided to postpone their IPO plans to a more appropriate time, told the reporters in New York about their growth story  in the last 24 years and their targets for the future. “When we saw that 9 out of 10 Turkish students in the United States ate Burger King, we decided to take this brand to Turkey. We opened the first restaurant in Etiler in 1994,” said Erhan Kuroğlu, and described their competition with Mc Donald’s, which already had 50 restaurants in Turkey that time, as follows: We were the first country in the world that surpassed Mc Donald’s despite coming 10 years from behind. This success owes much to our investments in the logistic and supply chains. As of today, we operate a total of 2,000 restaurants, of which 1,100 are in Turkey and 900 are in China. Besides, we also have Burger King restaurants in Georgia, Macedonia and the Turkish Republic of Northern Cyprus.”